Lusciously creamy on the tongue, this imperial strength Milk Stout is stronger and sweeter than its Double Cream sibling. You can expect the same full-bodied mouth-feel and bittersweet, mocha aromatics but with a hint of spice from the Moutere and Willamette hops. Available in stores nationwide and also in our online store.

About the artist – Scott Jackson

Cassels’ resident artist, Scott Jackson, has been involved since day one and has helped design their beer’s looks with his black & white prints. For these 440ml ‘Art cans’ he’s been given full licence to pull out he stops and draw some grungy illustrations largely inspired by his own artwork and the colourful milieu of his home-town, Lyttelton. The originals are mostly rendered in ink, watercolour, and shellac. 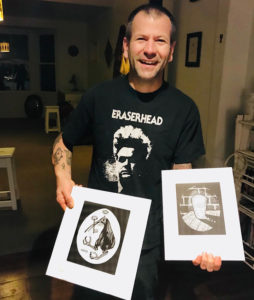