A family-owned Christchurch brewery’s beer has beaten some of the biggest global brands to be crowned the best in the world.

More than 2,200 beers from more than 50 countries entered the awards. Judges blind tasted and scored the entries across three rounds of judging.

Traditionally, all tastings are done in person by judges who gather from across the globe.

But the global Covid-19 pandemic meant the beers were “black-wrapped” and sent out to judges across Europe, Asia, Canada and Brazil who tasted them at home and connected for judging sessions via Zoom.

As well as taste quality, “design excellence” was also judged across seven categories.

“It always refreshing to see so many imaginative label designs and this year was no exception,” judging chairwoman Felicity Murray, founder of TheDrinksReport.com, said.

“The judges were particularly impressed by the growing number of beer brands breaking away from the category norm with creative new ideas that stand out from the crowd.”

Owner Alasdair Cassels, 70, who started brewing when he was 22, was delighted with the back-to-back win.

“I remember, when I was a whole lot younger, hearing about a small New Zealand vineyard winning best sauvignon blanc in the world and thinking that was amazing… and that’s what we are now – best in the world.”

Last week, Cassels had a milk stout customer from Dominican Republic order a 6 x 518ml case of Cassels Milk Stout online, which cost him about NZ$365 for the airfreight cost alone, the case of beer was only an additional NZ$44.

“All because he had heard about the world’s best milk stout and wanted to try it for himself,” Cassels said.

Business boomed last year for the brewery based in the Woolston area of the city.

And Cassels believes this year’s result will do the same.

They are pushing into some lucrative overseas markets, selling beer in the UK for the past two years and in China for the past six months. 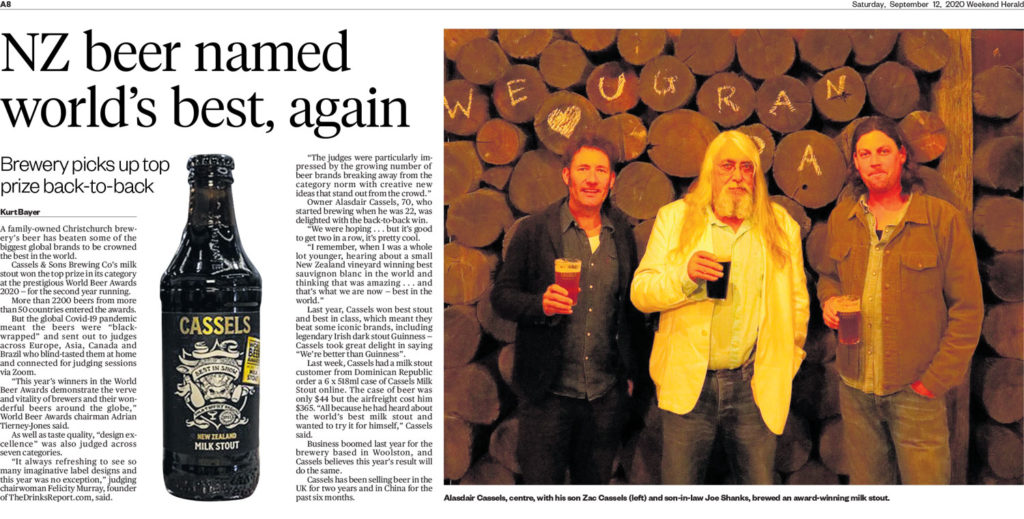